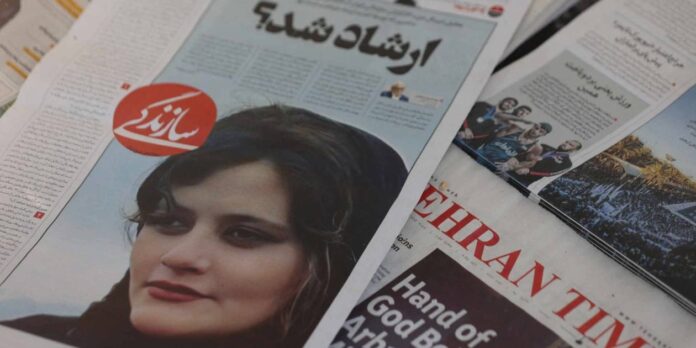 Mahsa Amini, 22, from Iran’s Kurdistan province, died in a coma after being arrested in Tehran last week by moral police, sparking demonstrations in many areas, including the capital.

It said two more people were killed in a “direct hit” by security forces in the town of Divandale, and a fifth in Degolan, also in the Kurdish area.

Reuters was unable to independently verify the reports.

There was no official confirmation of death. State news agency IRNA said there had been “limited” protests in many cities in seven states that had been dispersed by police.

State television said many protesters had been arrested but rejected “some allegations of death on social media” by showing two injured youths denying reports that they had been killed. .

Amid the nationwide outcry over Amini’s death, the Persian hashtag #MahsaAmini was mentioned nearly two million times on Twitter.

Police said as they waited for other women to be detained by the morality police, which enforce strict rules in the Islamic Republic that require women to cover their hair and wear loose clothing in public. , said Amini had fallen ill.

However, her father repeatedly stated that his daughter had no health problems, adding that she had bruises on her leg.

Protests have been most violent in Kurdish areas, where authorities have so far suppressed riots by 8 to 10 million Kurdish minorities.

A video posted earlier by Hengaw on Twitter showed demonstrators throwing stones and a man could be heard saying there was a “war going on in Divandarreh” and accusing police of attacking him.

Reuters was unable to verify the authenticity of the video.

Internet disruption observatory Netblox reported on Monday that “internet connectivity was almost completely cut off in Sanandaj,” the capital of the Kurdish region, and said on its Twitter account that it had linked it to the protests.

Hengaw reported deadly use of force by security forces in Kurdish areas, but there were no immediate reports of deaths during protests in other parts of Iran.

Social media videos show demonstrations in Tehran and their spread to cities such as Rasht, Mashhad and Isfahan.

A video shared by the 1500tasvir Twitter account, which was posted by its 70,000 followers, showed a nearby security force vehicle spraying water on demonstrators and a police car with smashed windows in Tehran. It was reflected.

“People throwing stones have stepped forward against the police. Death to the dictator!” A woman’s voice is heard.

He also shared a video showing him protesting against the militia group Bajiji at a university in Tehran.

Reuters was unable to independently verify the video.

It marks some of Iran’s worst fears since street clashes began in late 2021 over water shortages.

The US has demanded accountability for Amini’s death.

A White House spokesperson said, “The death of Martha Amini after being injured while in police custody for wearing an ‘inappropriate’ hijab is an appalling and egregious affront to human rights.” said.

France’s foreign ministry condemned her arrest and the “violence that led to his death” and called for a transparent investigation.

Earlier, Tehran Police Commander General Hossein Rahimi said a “cowardly accusation” had been made against the police, that Amini was not physically harmed and that the police would “do everything possible to keep her alive.” ‘He said.

“This incident is unfortunate for us and we do not want to witness such an incident,” Rahimi said.

Police have released CCTV footage, apparently supporting their view. Reuters was unable to authenticate the video.

Anyone who violates Iran’s sharia (Islamic law) or hijab regulations is subject to fines or arrest. But activists have recently urged women to remove their veils, despite a crackdown by hardline rulers against “immoral behavior.”

Iran’s elite Revolutionary Guard has been quelling unrest in Kurdish areas of the country for decades, and many Kurdish activists have been sentenced to lengthy prison terms or the death penalty over the past few years.