Video: Passenger offloaded from SpiceJet flight due to ‘unruly and inappropriate’ behaviour 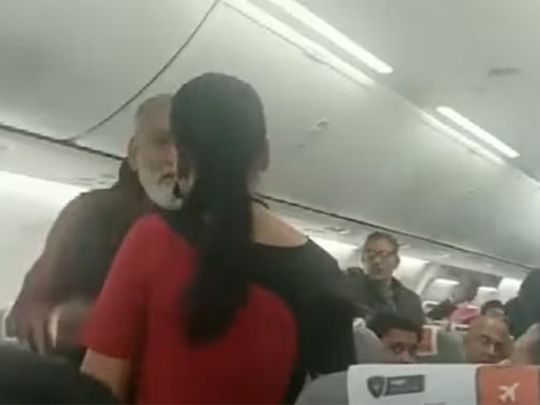 The defendant has been identified as Absar Alam and the FIR is registered with the IPC.

A senior police officer said at 4:39 pm (Monday), there was a call to the Police Control Room (PCR) regarding a passenger who sexually abused a flight attendant on a SpiceJet flight from Delhi to Hyderabad.

“The PCR call was made by SpiceJet Airlines security officer Sushant Srivastava. Absar was traveling to Hyderabad with his family. The suspect (Absar) was then dropped off and taken away by SpiceJet security staff and PCR staff to the IGI police station,” the official said.

In an alleged video of the incident that surfaced on social media, the accused is seen yelling at a flight attendant. Few passengers are seen intervening to stop an argument. The video is said to have been filmed by one of his passengers on the Delhi-Hyderabad flight.

Passenger Absar Alam, who was accused of cheating on a female flight attendant on the Delhi-Hyderabad SpiceJet flight, has been arrested following a complaint from SpiceJet security. Lawsuits have also been filed.

Meanwhile, SpiceJet said in a statement: “During boarding in Delhi, one passenger behaved uncontrollably and inappropriately, causing harassment and disturbance by flight attendants. I informed the staff of the same.The passenger and fellow passengers who were traveling with me have been unloaded and handed over to the security team.”

The crew informed the captain (PIC) and the guards of the same. Passengers and fellow passengers traveling with them were unloaded and handed over to security teams, the spokesperson added.

Aviation regulator DGCA said it was investigating the matter.

There have been many incidents of unruly passengers on flights in recent months. The DGCA was notified of two incidents of passenger fraud that occurred.

One of the passengers smoked in the restroom and was too drunk to listen to the crew. Another passenger allegedly used the empty seat and blanket of a female fellow passenger to defecate when he went to the restroom.

Earlier, a high-pitched altercation between a passenger and one of the crew members of an IndiGo flight went viral on social media. The controversy began over food on the airline’s Istanbul-Delhi flight.