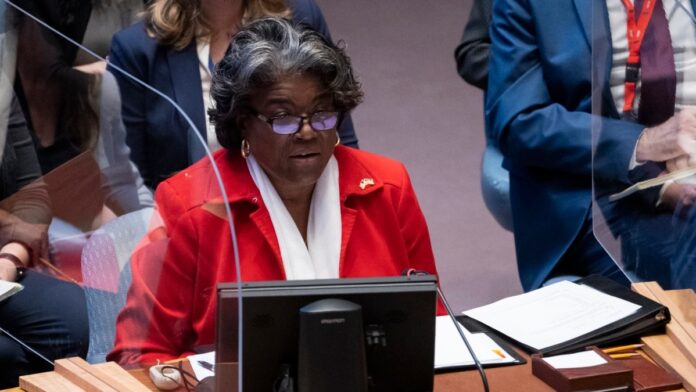 US Ambassador Linda Thomas Greenfield said at a meeting convened by the US that it would “provide the Security Council with another opportunity to hold North Korea accountable for its dangerous rhetoric and destabilizing behavior.” Stated. “The United States will propose a presidential statement to this end,” she said.

A presidential statement from the 15-member UN Security Council is one step below the resolution and requires the consensus of all members.

Thomas-Greenfield said Friday’s test was Pyongyang’s eighth ICBM launch this year, part of a record 63 ballistic missile launches in 2022, and the previous annual record of 25. He stressed that it was more than double.

The latest intercontinental ballistic missile (the second this month) flew an estimated 1,000 kilometers and collided within Japan’s exclusive economic zone off the Northern Territories, just 200 kilometers from Hokkaido.

The Japanese ambassador said calculations based on the flight trajectory showed the missile’s probable range could exceed 15,000 kilometers.

“In that case, all of Asia, all of Europe, all of North America including New York, all of Africa and even parts of South America could be within range of this illegal nuclear warhead delivery system,” the ambassador said. Stated. Kimihiro Ishikane added at the board meeting that it was “outrageous” to allow North Korea to hold the entire international community hostage.

Friday’s launch was widely criticized, including by UN Secretary-General António Guterres, who called on North Korea to stop its provocative actions.

North Korea’s Foreign Minister Choi Sun-hee said in a statement published by state media on Monday that the country’s missile tests were part of its legitimate right to self-defense, and the UN secretary-general said the United States’ ” accused of being a puppet.

North Korea says its tests are in response to military exercises by the United States and South Korea.

“We have seen how North Korea is taking full advantage of the inaction and division of this council to build its nuclear arsenal,” said Ambassador Hwang Jung-kook.

“After the Security Council failed to adopt a resolution in May due to opposition from two permanent members, the DPRK launched 40 ballistic missiles and promulgated a new law on nuclear weapons policy. he added.

The Chinese ambassador said the Chinese government was concerned about rising tensions and a chain of conflicts on the Korean peninsula, which would not benefit the parties.

“The Security Council must play a constructive role in this matter and should always pressure North Korea, not always criticize it,” said Ambassador Zhang Jun. “Deliberations in the Security Council are aimed at de-escalating tensions, facilitating an early deterioration of the situation, and leaving room for diplomatic efforts, not creating obstacles to diplomatic efforts.”

Asked by VOA after the meeting whether China would support the statement proposed by the United States, Ambassador Zhang said, “I don’t think so. I made my statement. You have my answer.” think.”

Russia also appeared likely to block as it accused Washington and its allies of fueling tensions with military drills and sanctions.

She reiterated her commitment to diplomacy to resolve tensions on the Korean Peninsula.