US continues to inflame tensions on Korean Peninsula 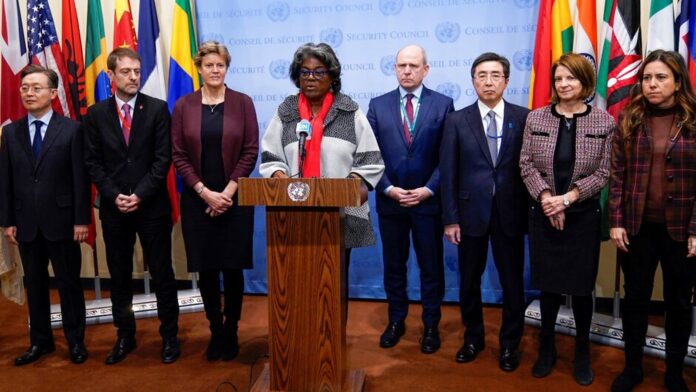 The United States continues to escalate tensions in Northeast Asia after North Korea launched an intercontinental ballistic missile (ICBM) last week. Washington is using this situation to further demonize China and Russia and to justify its rapidly expanding militarization of the Indo-Pacific region.

The 15-member UN Security Council met in New York on Monday at Washington’s insistence and used its platform to denounce Beijing and Moscow while proposing further measures to isolate North Korea. In addition to five countries and ten non-permanent members, South Korea, which is not included in the non-permanent members, also participated in the meeting.

US Ambassador to the UN Linda Thomas Greenfield called on the Security Council to pass a formal presidential statement condemning North Korea. After the meeting, 14 countries (including eight members of the Security Council), led by the United States, issued a joint statement condemning the latest missile launch as a “clear threat to international peace and security.”

During the conference, Thomas Greenfield referred to Beijing and Moscow, arguing that “two veto-wielding members of the Council are enabling and encouraging North Korea.” [North Korea]” She continued, ”They allowed the regime to begin this latest reckless missile test, which endangered the lives of Japanese civilians and unnecessarily increased tensions in the region. These two men’s blatant sabotage endangers the Northeast Asian region and the entire world.”

North Korea launched what is reported to be a Hwasong-17 ICBM last Friday, with Japan claiming it landed in its exclusive economic zone in the Sea of ​​Japan west of Hokkaido. According to Japan’s Defense Minister Hamada, the missile was launched in a lofted trajectory and could hit the mainland United States.

In recent weeks, Washington has encouraged North Korea to take increasingly belligerent actions as a means of putting pressure on Russia, especially China. The US is now piggybacking on the launch to step up its military exercises, while lying that Beijing and Moscow are ultimately responsible for unilaterally overthrowing the “rule of law” around the world. Vedant Patel, a deputy spokesman for the US State Department, said last Friday that China “has a responsibility to make clear to North Korea that it must not engage in illegal nuclear or ballistic missile tests.” rice field.

In response, Chinese Ambassador to the United Nations Zhang Jun said on Monday, “All parties should remain calm, exercise restraint, act cautiously, speak out, and avoid actions that may increase tensions and lead to miscalculations. We need to ensure that the situation does not escalate into a nasty one,” he said. cycle. He called on Washington to take the initiative to “proactively address North Korea’s legitimate concerns” about security. Having witnessed numerous US regime change operations in countries like Iraq and Libya, North Korea rightfully fears falling victim to similar imperialist plots.

The US, in the words of Thomas Greenfield on Monday, called on North Korea to “engage in serious and sustained diplomacy” while insisting it was ready to “meet without preconditions.” This echoes the words of U.S. Vice President Kamala Harris, a bystander at the Asia-Pacific Economic Cooperation (APEC) Forum in Thailand last Friday, where she called North Korea “a serious and sustained diplomatic effort.” commit to.”

But Washington showed just what “diplomacy” means by sending two B-1B Lancer bombers for aerial training over the Korean Peninsula on Saturday as part of joint U.S.-South Korea exercises. Indicated. The B1-B was escorted by her F-16s from the United States and F-35A fighters from South Korea, the latter of which also launched attacks on simulated North Korean military targets the previous day. The bomber also participated in separate joint aviation exercises with five F-2 fighters from Japan’s Air Self-Defense Force northwest of Kyushu.

The B-1B bomber can carry the largest conventional weapons payload in the US Air Force. The US military claims the B-1B can no longer carry nuclear weapons, but there is no reason to take the Pentagon’s words at face value. Washington has made it clear that its most devastating weapon is in a position to intimidate and, if necessary, destroy North Korea, a poor nation of 26 million people.

As the White House said after last week’s meeting between President Joe Biden and Chinese President Xi Jinping, this is what Washington means by “managing” its relationship with Beijing. While it appears to be doing so, the United States is increasing pressure on other fronts, seeking to further isolate North Korea by driving a wedge between Beijing and Pyongyang. In doing so, Washington may want to rule out North Korea as a potential additional adversary in future wars with China, a prime target for its military build-up in the region.

With the support of Japan and South Korea, Washington bears primary responsibility for these tensions in the Asia-Pacific. Last year, North Korea scrapped a de facto agreement between former President Donald Trump and Pyongyang to scale back joint military exercises with Seoul in exchange for a moratorium on long-range ballistic missile and nuclear tests. North Korea hoped this would lead to economic aid and the easing of economic and diplomatic sanctions. This never happened.

Instead, Washington has allowed North Korea to languish under brutal sanctions as the world is ravaged by the COVID-19 pandemic, compounding the economic crisis. Moreover, Washington is now increasing its joint military exercises with Japan as well as South Korea, using the situation to trick Pyongyang into taking action so as not to appear weak. At the same time, the United States has offered no serious course of action other than North Korea’s complete surrender.

Washington recently agreed with Seoul to keep US nuclear-capable assets in South Korea virtually permanently for the first time since 1991. Include real-time information. Washington sees this as a key aspect of its anti-ballistic missile system in the region aimed at China.

Ultimately, the US is using North Korea as a pretext to surround China with weapons and military alliances. All of this brings the region dangerously close to conflict.