Through mountains and under a lake, Mumbai to Pune via Asia’s widest road tunnels 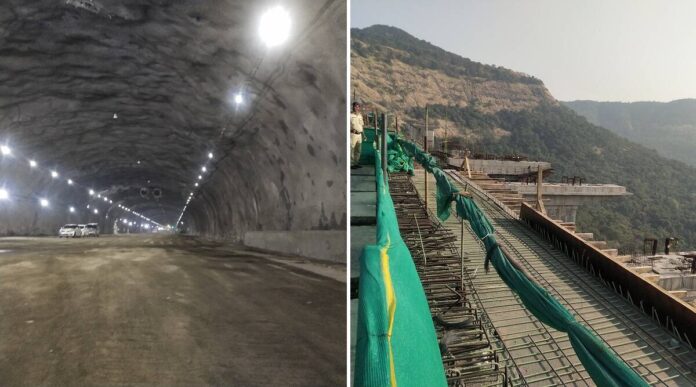 On a weekday afternoon, men in helmets and fluorescent reflective jackets plastered the walls of a massive cave, led by headlights and a string of lights on the roof. Finally, a supervisor reviewed the unfinished stretches.

This is Tunnel 2 of the INR 660 crore ‘Missing Link Project’ of the Mumbai-Pune Expressway, the second of two sets of twin tunnels, each 24 meters long, set to be the widest in Asia. It has been.

By January 2024, if all goes according to plan Mumbai To Pune Go through this “missing link”. This is an engineering marvel that is expected to decongest the six-lane Mumbai-Pune highway.

Currently, people traveling between the two cities take either the 6-lane 94 km long Mumbai-Pune Highway or the former Mumbai-Pune Highway (or National Highway 4), a 4-lane 111 km road. use. From Shil Phata to Dehu Road. But somewhere near the Karapur toll station, traffic from both highways merges, leading to a bottleneck all the way to the Khandala exit, as the 10-lane traffic converges on his 6-lane of the highway. In addition, as this section passes through ghats, it is prone to landslides during the monsoon season, causing further congestion.

Last week, Maharashtra Chief Minister Eknus Shinde Visited Tunnel 2 of the “Missing Link” project. It is called this because it fills a major gap in the existing highway.

“This will be a landmark project in this country as it uses the latest technology currently used in some foreign countries. At 23.75 meters wide, it will be the widest tunnel in the world. There are measures in place to prevent fire incidents inside,” he said.

The Rs 6,695 crore project consists of two sets of twin tunnels and two viaducts, one of which is a cable-stayed bridge. MSRDC sources say the tunnel is nearly 90% complete, but the overall project readiness is about 60%.

Once completed, those driving from Mumbai to Pune will take the ‘Missing Link’ section of Khopoli, bypassing the highway and driving 840 meters over a viaduct to enter Tunnel 1 (1.75 km long). Upon exiting this tunnel, the vehicle travels 640 meters of a cable-stayed viaduct before entering his 8.9 km Tunnel 2. Part of this tunnel sinks about 170 feet underground under Lake Lonavala, eventually emerging on the Singad Institute side.

The Rs 6,695 crore project consists of two sets of twin tunnels and two viaducts, one of which is a cable-stayed bridge.

The link is expected to reduce the distance between the two cities by about 6 km and reduce travel time by 20-25 minutes.

Underground tunnels are usually 3+3 lanes (3 lanes for oncoming traffic and 3 lanes for outbound traffic) but have an average width of 12 meters, whereas the “missing link” tunnels have 8 lanes each (4+4 lanes) with emergency lanes 2.5 meters wide on each side.

With the Mumbai-Pune Expressway handling about 60,000 vehicles per day and traffic increasing by an average of 12-15% each year, the tunnel is expected to take a toll on the load. “The tunnel was built with the future traffic demand of this road section in mind. “The project proposes to avoid steep grades and girder sections, turning the existing highway into a zero-death corridor,” he said.

Engineers at MSRDC said the Missing Link project represented the twin tunnels built by controlling Sahyadris basalt blasting. Nearly Rs 5.7 lakh trucks were moved to remove his 400,000 cubic meters of debris generated in the blasting process and the waste was reused for road construction.

Boring hard basalt was tough, but the engineers faced an even greater challenge. This is because the 2.5 km section runs near the depths of Lake Lonavala (114 to 175 meters below ground).

“We used the same controlled blasting method in this particular area under the lake as we did when we excavated the mountains. However, there were no major problems except for a few.However, the tunnel will be used for at least 100 years, so we are waterproofing and chemical grouting to prevent water leakage.”This is the construction of the tunnel. We support MSRDC.

The project will employ about 2,000 workers, of whom about 1,500 work in the tunnel alone.

The existing Mumbai-Pune highway has six tunnels, but MSRDC plans to enhance the safety features of the new tunnels.

The two tunnels have more than 30 crosswalks every 300 meters, allowing people to move from one tunnel to another in an emergency. The tunnel is also equipped with a fire suppression system including sprinklers, smoke detectors and emergency response vehicles.