Spotted lanternfly spreading in Ohio: What you should do about it 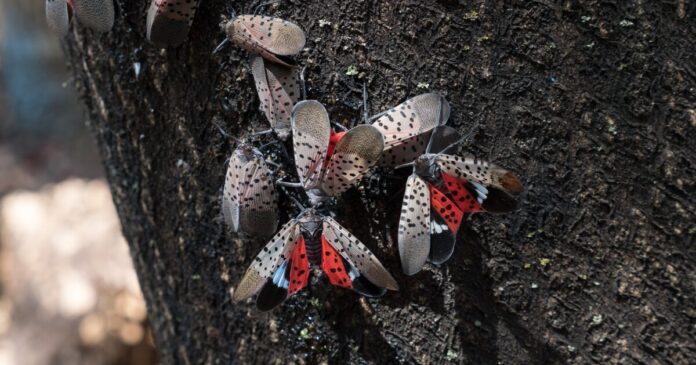 A spotted lantern fly, an invasive insect from Asia that can damage agriculture, has been detected in Ohio. Experts are asking residents to look for it.

An invasive insect found on the East Coast that could threaten agriculture has been spotted in Ohio, and experts are urging residents to take precautions.

The spotted lanternfly is an invasive insect from Asia. First discovered in Pennsylvania in 2014. It has since been detected across the East Coast and is moving west.

Insects like to eat another invasive species, the tree of heaven. They also like vines, cucumbers, hops, roses, ornamental trees and other plants.

It poses no threat to humans. However, it can damage and stress fruit trees and vines, and is a nuisance in backyards as its secretions attract ants and other pests.

Ashley Leach, an entomologist at Ohio State University, spoke at the Farm Science Review conference on Tuesday. The insect is still in its active colonization stage in Ohio and researchers are collecting data on it, she said.

“If you go to Google and type spotted lanternfly, a lot of doom and gloom will come to pass. “I’m not looking,” she said. “Many people who have suffered losses in the past know and have management options.”

Leeches can benefit smaller farms and gardens, as they have more variety of plants and are less likely to encounter plants that insects like to eat.

To prevent bugs from spreading, experts are urging Ohioans to learn how to identify bugs.

“Check out those ID photos and educate yourself so that if you’re hanging out in your backyard and you go out, you won’t see that bug. We can start monitoring,” Leach said.

State officials suggested killing it or putting it in a jar, Report to the Ohio Department of Agriculture.

Alejandro Figueroa is a member of the Legion Reporting to America, a national service program that places journalists in local newsrooms. Support for his WYSO report on food and food insecurity in Miami Valley Caresource Foundation.