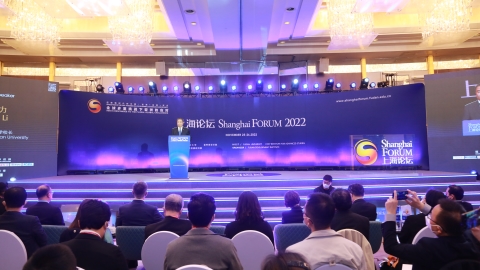 Jin Li, President of Fudan University, delivering a speech at the opening ceremony of the Shanghai Forum 2022.

The Shanghai Forum 2022 kicked off on Friday with representatives from think tanks, universities, research institutes, companies and governments both online and offline.

Under the theme of “Asia’s response to multiple global challenges,” we discussed how China and other Asian countries can continue to contribute to the development of the world as a whole under multiple challenges.

“A growing, prosperous, stable and dynamic Asia serves the common interests of all countries and regions, including China,” said Jin Li, president of Fudan University, the organizer of the forum, at the opening ceremony. rice field.

“We, rooted in Asia, need to build global consensus to find solutions to the world’s most pressing and important issues, and put forward plans on major topics of global governance at the Shanghai Forum. ”

Fudan will continue to promote the opening up of education, carry out in-depth cooperation and exchanges with other parties in fields such as science and technology, culture and environmental protection, and contribute Asian wisdom to regional peace and development, he said.

Chey Tae-won, Chairman of SK Group, said that since its inception in 2005, the forum has become an excellent platform for gathering wisdom to solve global challenges.

He said the global climate crisis is getting worse each year, threatening life and biodiversity on Earth, and extreme weather is having an unprecedented impact on humanity. Therefore, the entire international community must unite to overcome the global crisis and reduce environmental damage.

He said both China and South Korea have introduced relevant policies, developed green technologies and announced carbon-neutral targets. He hopes that the two countries can work together to bring about positive change in Asia and the world.

South Korea’s Ambassador to China Jeong Jae-ho said maintaining dialogue between governments and peoples is critical to achieving peace, stability and prosperity in the world, narrowing differences and building mutual trust. said there is.

A growing, prosperous, stable and dynamic Asia serves the common interests of all countries and regions, including China.

In the keynote section, former US Ambassador to Saudi Arabia Chas Freeman pointed out that China has become the largest trade and investment partner for all its neighbors and ASEAN has become the fifth largest economy in the world. It contributed greatly to the opening up of China.

Wang Feng, a foreign member of Italy’s National Rinzai Academy, spoke about the declining fertility trend in East Asia and its impact on the region’s economic development.

However, it has also led to problems such as an aging population and a declining birth rate, prompting governments to change the traditional economic growth model characterized by an increase in the labor force due to population growth.

He said governments and businesses need to work together to create more just, sustainable and widely supported social and policy systems to adapt to the new situation.

Indonesia’s former deputy foreign minister, Dino Patti Jalal, said he was proud of what Asia had achieved over the past decades, with Southeast Asian countries and ASEAN member states growing from five to 10. rice field.

He said the rest of the world should learn from ASEAN countries in dealing with conflicts and deepening cooperation.

Arancha Gonzalez, former European Union Minister of Foreign Affairs and former Chief of Staff to the WTO Director-General, said that China, as an important part of Asia, has an important global responsibility to promote and steadily accelerate reform and opening up. said that he was responsible for Economic development.

She said Asian countries can learn from ancient Chinese wisdom when faced with multiple challenges.

He said technological progress and innovation are key to solving multiple challenges, and there is an urgent need to improve related incentive mechanisms.

He said the world needs disruptive and innovative products, but it also needs to recognize the risks posed by new technologies. To build on, we need to improve the management of green technology R&D funding and strengthen cooperation to foster innovation in healthcare.

Drawing on experiences in Asia and China, he said the world needs a stable political environment to foster predictable economic governance over the long term. We also need positive strategies to accelerate digitalization and green transformation, as well as intervention measures to reduce economic inequalities and improve social inclusion.

He said development should be accessible to all and that multilateral mechanisms are needed to protect the common interests of all countries.

The forum will run through Saturday and feature five roundtables on topics ranging from ESG to digital finance.