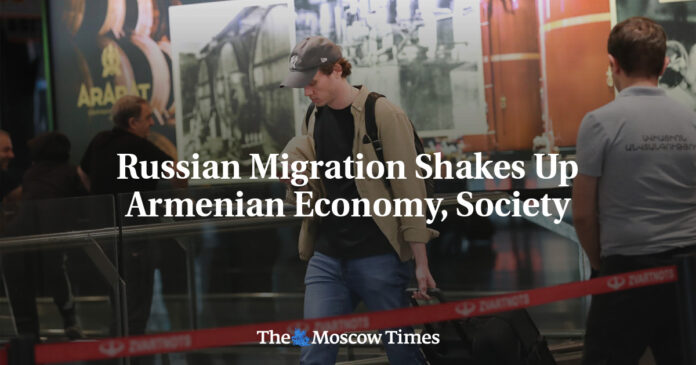 YEREVAN, Armenia — Igor landed at Yerevan’s Zvartnots airport from Moscow on Tuesday and appeared bewildered after his knee-jerk decision to flee his country’s mobilization.

“But then the ticket got even more expensive. For example, my friend bought it for $5,000 and it arrives tomorrow. and came right away.”

Igor is one of tens of thousands of people from all over Russia who fled to the South Caucasian country to avoid mobilization and being sent to fight in Ukraine.

This wave of Russian conscription evaders looks set to have a major impact on Armenia, a population of about three million. caused it.

Volodya, 35, flew to Yerevan on the same plane as Igor. He had arrived for a long-planned vacation, but he said he wasn’t sure if he would return to Russia.

“I am here with my wife and children as a tourist.

It is not known exactly how many Russians have arrived in Armenia since Russian President Vladimir Putin announced the mobilization last week, but 20 daily flights from Moscow and St. Petersburg, as well as cities in the south of Russia. More flights from Russia have arrived in Yerevan. Like Sochi and Mineralnye Vody.

More than 30,000 Russians have crossed the border into neighboring Georgia since September 21, and at least 98,000 into Kazakhstan in Central Asia, according to official figures.

And the current mass exodus is much smaller than what happened early in the war when tens of thousands of people fled for fear of possible martial law, political repression, economic problems and international isolation. It looks like

According to official Armenian statistics, a total of 372,086 Russians arrived in Armenia in the first half of this year, up from 156,496 in the same period last year.

Many of these people never settled, often moving to European destinations or returning to Russia, but people who changed the country’s economy and society.

One of the most immediate effects on ordinary Armenians is the skyrocketing property prices, especially in Yerevan, causing evictions and displacing low-income people from the center most popular with Russians.

Already in March, the purchase price of a square meter property in downtown Yerevan was up 20% year-on-year. Since then, rents have skyrocketed, too.

Consumer price inflation exacerbated by new arrivals is likely to subside after supply catches up with demand, but housing inflation is a complex issue, according to economist and businessman Samson Grigorian. .

“There are no quick fixes,” he said. “It takes time to get new housing stock.”

The northern city of Gyumri, another popular destination for Russians, has also been hit by rising prices.

“I am a programmer. Half a year ago, the whole company moved to Yerevan, Armenia. Initially, our employer rented us an apartment, but that clause in the contract expired. That’s why I moved to Gyumri, ”said Natalia, 25, from the central Russian city of Perm. rice field.

Inflation in Gyumri’s property sector was a problem earlier this year, but has largely been contained, according to Gyumri tourism expert Lisa Gasparian.

“In this city we have guests from Russia, Belarus and Ukraine. We love peace. We welcome everyone, but may peace come,” she told the Moscow Times. Told.

At the same time, the arrival of tens of thousands of Russians, who often had much higher disposable incomes than the local population, created something of an economic boom across Armenia.

The European Bank for Reconstruction and Development (EBRD) last week upgraded its economic growth forecast for Armenia this year to 8% from 4.5%, noting that GDP expanded by 13.1% in the first half of 2022.

“Negative spillover effects from the country’s high exposure to the sanctions-hit Russian economy, through trade, remittances and foreign direct investment, were outweighed by the arrival of many people and businesses from Russia,” the EBRD said. said in the Regional Economic Outlook. report.

Arriving in Yerevan after fleeing mobilization and paying $2,000 for a plane ticket, Igor did not yet know where he would settle in Armenia. But he said that as an engineer by training, his friends told him he would be able to find a job soon.

Russian immigration to Armenia set a new bar, Cafe,school, mass mediaThese are concentrated in Yerevan and Gyumri, but there are also Russian communities in the mountain resort of Dilijan and Armenia’s third largest city, Vanadzor.

“The influx of people also contributes to the development of the region,” Grigorian said.

“Yerevan is not made of rubber, so it cannot accommodate everyone.”