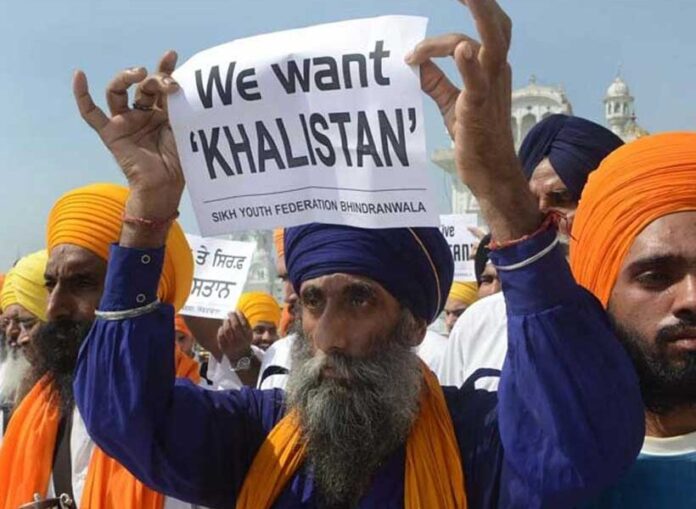 A recent referendum in Brampton, Canada, over demanding that Harrisan be a separate country from India, fueled the flames of mutual mistrust between the two counties’ ties. More than 100,000 Sikhs took part in the vote, followed by protests and vandalism of Hindu temples with anti-Indian slogans. (SfJ).

The Indian Ministry of Foreign Affairs (MEA) responded quickly, disputing the incident, stating in a weekly media briefing: The matter was exchanged with Canadian authorities through diplomatic channels. “ Following this, a travel advisory was issued for students and Indian nationals traveling to Canada.Exercise due caution and remain vigilant. “ Now, this exaggerated the issue, as Canada, in retaliation for this recommendation, issued an advisory to its citizens not to travel to areas near the India-Pak border, particularly Rajasthan, Punjab and Gujarat.

Seeing something similar between the two countries is nothing new. This ongoing process of mutual distrust has been going on for a long time. The main problem behind all these tensions remains unchanged: the Kharistan movement and extremist activities planned and carried out by radical and extremist elements. Haristan has always been a security concern from India’s point of view, especially by influencing public opinion among those who are largely aligned with the idea of ​​an independent Sikh state, whether India or India. has repeatedly questioned its domestic security. Diaspora in Canada or anywhere else in the world.

Diplomatic relations seem to have deteriorated further since Justin Trudeau took office. From 2020 to 2021, during the farmers’ protests in New Delhi, Trudeau supported Indian farmers during the escalating protests. Again, as the MEA continued to subpoena the Canadian High Commissioner to lodge a solemn protest against Trudeau’s statements, citing them as uninformed and unjustified, and advising them not to interfere in internal affairs, both sides A hostile situation arose between Elsewhere, EAM Jaishankar refused to attend his Covid-19 foreign ministers’ group led by Canada that same year. During his final state visit to India, Prime Minister Trudeau is said to have brought Haristan militant Jaspar Atwal with his official delegation. This was certainly not welcomed by the Indian side, as Atwal was the prisoner who attempted the assassination. Minister of Punjab, Malkiat Sidhu, in 1986.

Chronology of the Haristan Problem

In the literal sense, Haristan is the Pure Land. However, in Sikh political ideology, the Sikh homeland is the land of Khalsa. The Haristan movement indeed seems to have been born after Operation Blue Star, but the story began in 1929 when Motilal Nehru presented ‘Poor Naswaraj’ at the Lahore Sessions of the INC. The three who opposed it, Mohammed Ali Jinnah – for Muslims, Dr. BR Ambedkar – for Dalits and Master Tara Singh of Akali Dal- for Sikhs. And this was the Sikhs’ first claim to their homeland, and it gradually gained popularity and support at the grassroots level in Punjab, which then became the first foundation. punjab suva movementThe movement demanded a separate Sikh state within India for linguistic reasons. It lasted over 19 years. Following this, Punjab split into his three provinces. Punjab, Haryana, Himachal Pradesh, Chandigarh is the common capital of Punjab and Haryana.

The movement turned violent and radicalized with the rise of Jarnail Singh Bhindranwale. Some call him “Santo”, others call him an extremist. However, it is true that he condemned the armed struggle against the government of Indira Gandhi in search of another Sikh state, culminating in Operation Blue Star. This was followed by the assassination of Indira Gandhi by Sikh security agents. As a result, about 3,000 Sikhs were killed in anti-Sikh riots in 1984.

Recent trends and historical political discourse suggest that “Harristan” has been used by those in power like Trudeau as part of an identity politics agenda to increase voter share by winning the support of Canadian Sikhs. It shows that it is being used as a political tool. According to figures released by Immigration, Refugees and Citizenship Canada (IRCC), Canada is home to more than 190,000 Indians, about 5.1% of Canada’s total population, of whom 80,000 are Sikhs, about 2.1% of Canada’s total population, and 20,000 Indians. More Gujaratis make up about 0.6%.of the total population.

Trudeau’s last state visit to India An absolute political disaster with many speculators, because the Indian side did not pay much attention to him. But looking at the same state visit from a different perspective, the grass looks greener on the Trudeau side, as he landed at Palham Air Force Base with his wife and his three children and Because he portrayed himself as a homely man. Later, during his week-long stay in India, he visited his Harmandir Sahib in Amritsar and targeted Sikhs in Canada. On top of that, he also visited the heritage city of Ahmedabad to target Gujaratis in Canada, visited Mumbai and met many of Bollywood’s celebrities, making Bollywood the biggest influence on Indians overall.Prime Minister Trudeau has so far succeeded in gaining the support of a large portion of Canadian Sikhs, and to maintain this support, Canadian authorities have refused to take action against radical separatist forces. and tend to defend them by saying it is their right to protest peacefully.

Given the current geopolitical situation, it is clear that the Kharistan movement is deteriorating bilateral relations between the two countries. Because Kharistan and its associated extremist activities have always been a matter of concern for India’s internal security, reflecting issues related to internal security. foreign policy. At the same time, it is being used as a political tool to earn brownie points among sects of the population by defaming the very status of the Republic of India. are attracted to pursue higher education and the Indian side can never ignore it. If India wants to nullify the separatist influence on Canadian Sikhs, it must be done in a way that tends to heal the deep scars of the 1984 anti-Sikh riots. That bloodshed by making policies favorable to Sikhs in India and abroad.