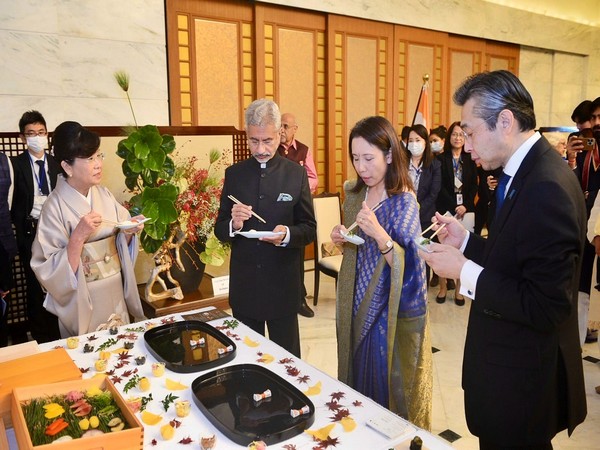 New Delhi [India]Nov 25 (ANI): Foreign Minister S Jaishankar honored Japanese Ambassador to India Hiroshi Suzuki on Thursday, celebrating the 70th anniversary of diplomatic relations between the two countries.
celebrated with Ideathon, horseback archery When millet sushi At the Embassy of Japan in India.
“I am honored to be able to visit the Embassy of Japan this evening. I salute Ambassador Suzuki for celebrating the 70th anniversary of diplomatic relations with Japan. Ideathon, horseback archery and today millet sushi,” Jaishankar tweeted.
Celebrating this year as the 70th anniversary of the establishment of diplomatic relations between Japan and India, Japan called upon the young people of India and Japan to embark on a journey of 900 km from New Delhi to Varanasi, spend nine days together, and discuss social and social issues. I have come up with an idea to solve it. economic problem.
Starting September 16th, 40 young people from Japan and India (20 from each country) will come together under the Youth Exchange Program in New Delhi to participate in a 900km venture-based project. Ideathon “Hacking the Innovative Future” culminated in the temple city of Varanasi, India on September 24th.
horseback archery It is a ritual in which an archer dressed in the hunting clothes of a medieval warrior shoots three targets while riding a horse. Among the yabusame events held all over Japan, the most famous is the yabusame event held at Tsurugaoka Hachimangu Shrine in Kamakura City on September 16th every year.
millet sushi A vegan alternative to sushi rolls. Millet, which is highly nutritious, is used instead of rice, and colorful vegetables and fruits such as cucumbers, carrots, and mangoes are used instead of fresh fish.

Strengthening the Indo-Pacific is a concept first articulated by former Japanese Prime Minister Shinzo Abe, top of a meeting with his Japanese counterpart Prime Minister Fumio Kishida in Tokyo, where Modi attended Abe’s state funeral. It was in
During the first decade of diplomatic relations, several high-level exchanges took place, including a visit to India by the Prime Minister of Japan in 1957.
Japan was one of the few countries to save India from its balance of payments crisis in 1991.
Established in 2017, Act East Forum is India’s “Act East Policy“Rubric and Japan”Free and Open Indo-Pacific Vision“.
During Prime Minister Modi’s visit to Japan in October 2008, the two leaders issued the “Joint Declaration on Japan-India Security Cooperation.”
There are also various frameworks for dialogue on security and defense between India and Japan, such as the “2+2” meeting, the Annual Defense Ministerial Dialogue, and the Coast Guard to Coast Guard Dialogue.
The Indian and Japanese Defense Forces have organized a series of bilateral exercises namely JIMEX, SHINYUU Maitra and Dharma Guardian. The two countries are also participating in the Malabar exercise together with the United States.
The Quad Alliance, on the other hand, is an informal strategic dialogue between India, the United States, Japan and Australia, with the common purpose of securing and supporting a “free, open and prosperous” Indo-Pacific region. increase. (Ani)