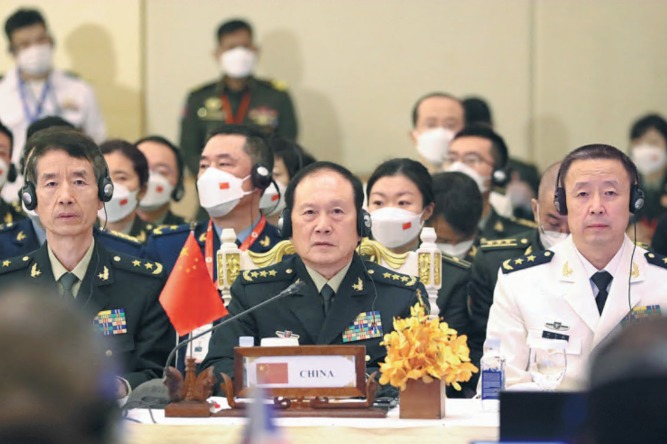 ASEAN and its dialogue partners Australia, China, India, Japan, New Zealand, South Korea, Russia and the United States, Wei said in a speech at the 9th ASEAN Defense Ministers’ Meeting Plus in Cambodia.

Facing major challenges to world peace and development, the right direction to take is to build a community that shares the future of mankind, which is also where the future of the world lies, said Wei. said.

He believes that all nations should be united rather than divided, just rather than hegemonic, open rather than closed, mutually beneficial rather than selfish, and of concern for all parties. He called for a balance between them and for jointly forming and maintaining a regional order that would serve their interests.

Wei also said the Chinese military hopes to continue to contribute to world peace in cooperation with other countries’ militaries.

China does not aspire to other countries’ interests, but its determination to defend its own interests is rock-hard, the general stressed, reiterating China’s position on the Taiwan issue.

He said that Taiwan is part of China, and that solving Taiwan’s problems is China’s problem. He added that he could.

Wei said the security situation in the Asia-Pacific region remained stable, but there were concerns. At the meeting, he said that the defense departments of all countries should support ASEAN’s central role, follow global security initiatives, focus on practical cooperation, and build strong barriers for universal security. He said we need to work together to

Liu Lin, a researcher at the People’s Liberation Army Academy of Military Sciences, said that security concerns in the Asia-Pacific region, mentioned by Wei, have increased their presence in Southeast Asia in recent years, mainly to compete with China. Said it was due to the United States. .

“The United States has attempted to ‘shape the strategic environment’ around China by building security frameworks in Southeast Asia and the Asia-Pacific region,” Liu said, referring to the AUKUS alliance with Britain and Australia, and a security dialogue involving the three Asia-Pacific nations of quadrilateral Australia, Japan, and India.

Wei therefore emphasized the unity of all countries in his speech and called for ASEAN to support its central role.

“China attaches greater importance to ASEAN’s role in conducting independent and self-determined diplomacy,” he said. “The regional bloc will emphasize the balance between China and the United States, bring great benefits to China-ASEAN defense cooperation, and bring enormous potential and room.”

China’s relationship with ASEAN is one of the priorities of the country’s neighbor diplomacy, which China pays great attention to, Liu said. Deepening defense cooperation between China and ASEAN will benefit regional peace and stability, especially in the South China Sea, and strengthen mutual trust between China and her ASEAN countries, she added.

On the sidelines of ADMM Plus, Wei said he also met with defense ministers or representatives from the United States, Vietnam, Laos, Australia, New Zealand, South Korea and Russia to discuss strengthening bilateral military cooperation and issues of common concern. Department of Defense.