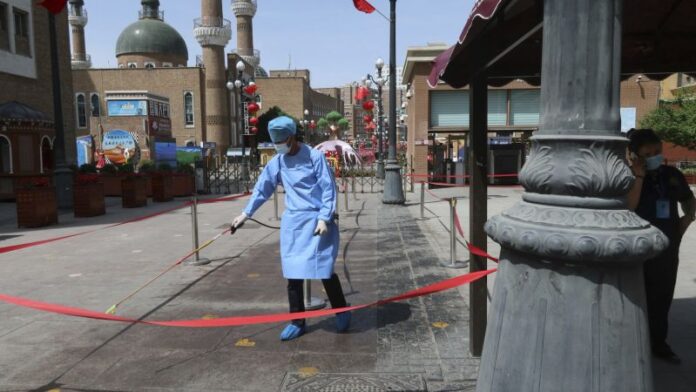 Chinese authorities announced on Saturday that they would ease a months-long Covid lockdown in the country’s far western region. Xinjiang Uyghur Autonomous Region “In stages” following protests over a deadly apartment fire in the provincial capital Urumqi.

At least 10 people were killed and nine injured. fire Public outrage over the tragedy has increased with the emergence of video footage that appeared to show lockdown measures slowing firefighters from accessing the scene and reaching victims, which occurred on Thursday, according to the local fire department. increase.

In one video that went viral on Chinese social media on Friday night, crowds marched to government buildings in Urumqi, chanting “end of lockdown.”

The city, with a population of nearly 4 million, has been under a strict lockdown since August, but daily Covid infections hover around 100 despite measures.

At a press conference on Saturday, local government officials pledged to “progressively” ease lockdown measures in areas classified as “low risk” by authorities.

Residents of these areas will be allowed to leave the building at staggered times of the day, but will not be permitted to do so until all neighboring residences are classified as “low risk” areas. It will not be.

Sui Rong, Urumqi’s head of propaganda, claimed that with the lockdown measures, the city of Urumqi “basically eliminated Covid cases in society.”

However, she did not acknowledge that there had been any protests, did not provide a clear timeframe for easing measures, or specify how many residents would be allowed to leave their homes or compounds after the announcement.

Opposition to government policies has intensified across China in recent weeks. Constant Zero Covid LockdownOfficials say it’s necessary to save people’s lives from the virus.

This week, in the central city of Zhengzhou, the world’s workers Largest iPhone Assembly Factory Clashed with security guards disguised as hazmat over late bonus payments and chaotic Covid rules.

And on Thursday, in the sprawling metropolis of southwestern Chongqing, a resident scorching speech Criticizing Covid lockdowns in his residential area. “I want to die without my freedom!” he shouts to a cheering crowd, who hail him as a “hero”, getting out of hand with several police officers who try to remove him.

Meanwhile, as the country heads into its fourth winter of the pandemic, hopes that Beijing may hint at a slight easing in its approach amid rising case numbers are a sign of the easing of some quarantine requirements. After that, it starts to fade.

Covid cases in the country reached a record high this week, according to the National Health Commission.