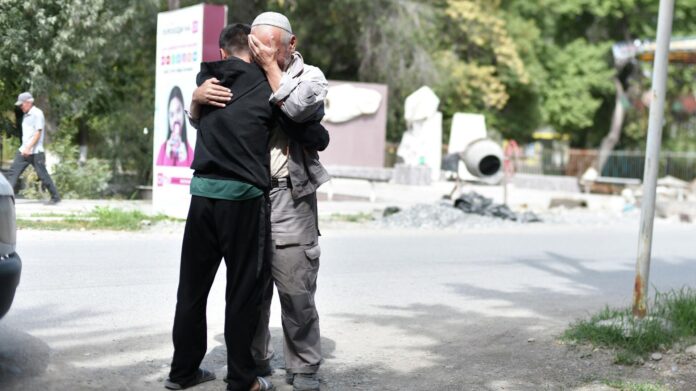 The president said at the event that food security is one of the most pressing issues facing the world today. Since the last summit in 2019, the number of people facing food insecurity has increased from he 135 million to he 345 million.

Tokayev said Kazakhstan will make more use of its agricultural potential to combat food insecurity. The country also serves as a reliable supplier of grains and staple foods.

The President called for accelerating efforts to combat hunger. In this regard, he said he was ready to expand cooperation with the Islamic Food Security Organization and UN agencies within various procurement projects, including the needs of Afghanistan.

“This is not an international banking system, it is only for Russia, so we don’t accept Russian meal cards,” said one Kazakh bank.

About 10 schools and 7 kindergartens were damaged as a result of the provocation at the border between Kyrgyzstan and Tajikistan in the Batken region.

According to Deputy Minister of Education and Science Nadira Dzhusupbekova, 195 educational institutions in the Batken region have temporarily suspended the educational process. Shelters are organized based on her 53 of them.

“The complete restoration of the educational process depends only on the proper decision of the headquarters under the conditions of ensuring the safety of the people. We will determine the amount of resources needed to restore a peaceful life,” the ministry said.

Emergency mode has been introduced in the Batken region of Kyrgyzstan.

On the morning of September 16, shootings began in several locations on the border between Kyrgyzstan and Tajikistan. Settlements in the Lylek and Batken areas came under attack. The armed conflict on the Kyrgyzstan-Tajik border has resulted in residents of his seven villages in Batken and Leilek provinces, Jekendi village in Chonalai district of Osh province, leaving their homes. 198 people were injured and 59 died.

The Kyrgyz Attorney General has initiated criminal proceedings under the “crimes against peace” clause of the Kyrgyz Republic Criminal Code.

Addressing the 77th session of the UN General Assembly on September 20, Tajikistan’s President Sadir Japarov said Kyrgyzstan was never the first to strike.

Kyrgyzstan and the European Union discussed ongoing work to harmonize laws in accordance with the new constitution based on transparency and inclusiveness.

Discussion took place at 12:00.th Round of the annual human rights dialogue between the European Union and Kyrgyzstan. A participant stressed the importance of close cooperation between her EU and the Kyrgyz Republic in the current geopolitical situation.

The EU stressed the need for an effective democratic system of checks and balances.

In particular, the EU and Kyrgyzstan held in-depth discussions on human rights and good governance.

“The EU expressed concern about generally negative trends in the area of ​​basic human rights, in particular the narrowing of the space for free movement of civil society and the increasing pressure on freedom of speech. expressed concern about the broad and seemingly arbitrary application of Article 330 of the Penal Code on peace and the enforcement of the law on false information,” the EU delegation said in a statement.

Tajikistan Foreign Minister Siroziddin Muhriddin and Organization for Security and Cooperation in Europe (OSCE) Executive Director Helga Schmidt exchanged views on the latest developments on the border between Tajikistan and Kyrgyzstan.

The meeting was held in New York on September 20 as part of the United Nations General Assembly’s High-Level Week.

A new armed conflict erupted on September 14 on the Tajik-Kyrgyzstan border, escalating into large-scale clashes that once again brought destruction and death on both sides of the border.

Tajikistan’s Ministry of Foreign Affairs announced that 41 citizens were killed in border conflicts from September 14-17. Officials have yet to report on the extent of the destruction.

In 2022, Tajikistan’s foreign trade turnover will reach about $4.8 billion, 18.4% higher than the same period in 2021, reports the Republican Statistics Office.

The implementation of these large-scale projects in the energy and telecommunications sectors is designed to promote sustainable socio-economic development across the region, successful integration into the system of global economic relations, and strengthening regional peace and stability. I’m here.

Berdymuhamedov said Turkmenistan has consistently implemented an energy strategy focused on diversifying its energy supply to the world market.

President Serdar Berdimuhamedov addressed the summit of international organizations as an honored guest, calling on SCO member states to support Turkmenistan’s initiatives at the United Nations to strengthen peace, security and stability.

By promoting a philosophy of trust-based dialogue in international relations, the Turkmen leader said Ashgabat intends to start drafting a UN General Assembly resolution “Dialogue is the guarantee of peace”.

“By adopting such a document, UN Member States reaffirm their basic and unambiguous commitment to peaceful and negotiated solutions to conflict situations, however difficult they may appear,” Berdimuhamedov said. I am confident,” he said.

According to the Head of State, restoring a culture of respectful political communication is now gaining universal importance as it is one of the key conditions for a responsible and non-confrontational approach.

“On this basis, Turkmenistan will submit to the UN General Assembly a proposal to declare 2025 the Year of Peace and Trust,” emphasized Berdimukhamedov.

The first container train has launched along the Kashgar-Osh-Andijan-Galaba-Hairattan new transport route to develop the China-Kyrgyzstan-Uzbekistan-Afghanistan multimodal corridor.

The train consists of 12 40ft containers. It is known that Uzbekistan offers a 70% discount on transportation through the territory of the republic. Other participating countries offer tariff concessions of up to 50%.

It was reported that the Chinese side loaded the goods into containers and loaded them onto fitting platforms in Uzbekistan at Osh railway station in Kyrgyzstan.

Preliminary calculations put the turnover of cargo to Afghanistan alone at more than 4,000 containers per year.

Uzbekistan’s President Shavkat Mirziyoyev and Russian President Vladimir Putin signed the Declaration on the Comprehensive Strategic Partnership between Russia and Uzbekistan at the SCO Summit in Samarkand.

During the meeting, the heads of state discussed expanding the scope and volume of trade, forming effective mechanisms to promote joint cooperation projects, and expanding working contacts between regions.

Putin presented Mirziyoyev with the Order of Alexander Nevsky.