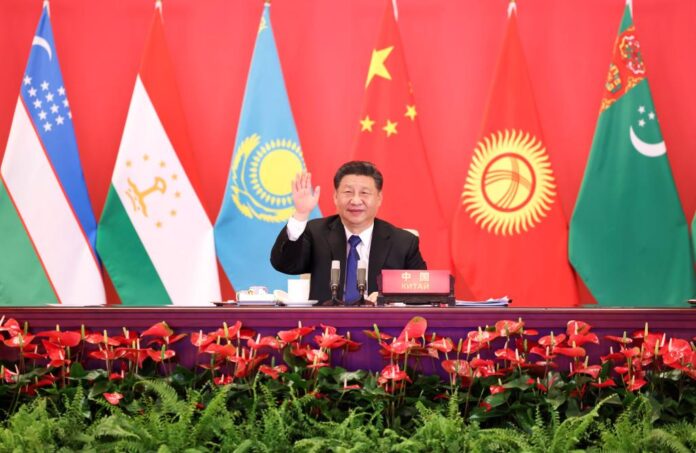 The existence of the Republic of China in Taiwan as a separate entity from the People’s Republic of China in Beijing is the single greatest threat to the survival of the Chinese Communist Party. For years, Beijing has pursued steps to create favorable global conditions for “reunification,” including military scenarios. A war over Taiwan would leave China unable to secure energy supplies at sea.

To withstand the economic turmoil caused by the conflict in the Western Pacific, China has focused on Central Asia as part of its strategic thinking.

China has been seriously considering decoupling scenarios with the West as well as building up its military power. To avoid economic turmoil, Facilitate Global use of the renminbi, establishment of own multilateral financial institutions, deepening ties with important developing country regimes for strategic resources. Central Asia offers an alternative land-based trade and energy route to the maritime-based international political economy that is the cornerstone of the current geopolitical environment.

On September 14, General Secretary Xi Jinping made Kazakhstan the first foreigner. visit since the pandemic started.In a letter published by Kazakhstan’s local media, Xi said admired Kazakhstan’s establishment as an important connectivity hub in Eurasia and its “important contribution to ensuring the stability of global supply chains”.

Since the Central Asian countries became independent in 1991, China will take this opportunity to take steps to build Eurasian land logistics routes to meet trade and energy needs in the event of conflict in the East. I turned my attention to The talk of “reviving the old Silk Road” was initiated by then Prime Minister Li Peng. toured He proposed many large-scale projects that have created regional connectivity and economic integration between China and Central Asian countries, such as oil and gas pipelines, railways and highways.

For example, the Sino-European rail system, which leaves China at another location along the borders of Russia or Kazakhstan, has been in operation ever since. 2011Having faced obstacles such as different gauges of railways in China, Kazakhstan and Russia, poor port management and international management of freight traffic, this Eurasian railway system has undergone expansion and continuous performance upgrades. and will be a valuable strategic asset for Eurasia. China’s long-term geopolitical goals.

Trains have increased capacity significantly over the past decade, as shown during the pandemic.They are developing to absorb so many containers that they choose away from sea- and air-based shipping.In 2021, trains in China and Europe managed to be run over. 15,183 bottles bring 1.46 million Twenty-foot equivalent units (TEUs) compared to 171.1 million TEUs operated at sea. This is up from just 1,702 trains in 2016, his 8,225 trains in 2019, and his 12,406 trains in 2019. 2020.

Shortly after Russia launched its war with Ukraine, a Chinese freight train chose to bypass Russia and pass through Kazakhstan (then arriving in Azerbaijan on a Caspian ferry). gain 6 times. In 2020, two major freight forwarding hubs on the border of Kazakhstan and China, Alashankou and Khorgos, saw Volume increased by 41.8% and 37% compared to pre-pandemic. now, Third A border transit hub is under construction.Kazakhstan plans gain By next year, the Caspian Sea cargo capacity will be increased to 2 million tons.Possibility of Construction of China-Kyrgyzstan-Uzbekistan Railway new Uzbekistan’s traction this year as it seeks to tie up trade with South Asia.

Chinese government representatives have begun to emphasize the efficiency of the “middle corridor” linking Kazakh Railways with Turkmenistan, Iran, Turkey and Europe. 2021 report For China Railway’s China-Europe trains, it has listed “ensuring the security of global supply chains” as one of its development priorities, and as an “emergency measure” to stabilize unforeseen events affecting maritime trade. It directly describes the role of the train.

The opportunistic timing for China to consolidate this land trade and energy route across Eurasia is now at its peak as countries in the region face economic turmoil from the Russo-Ukrainian war.especially in rural areas Uzbekistanhave come to view connectivity as a matter of survival and support China’s route diversification plans.

This includes gradually incorporating Afghanistan into the regional transport system.Beijing perceive A return to Taliban leadership in Afghanistan as a first step towards the desired stability needed for the regional trade network linking Central and South Asia. 2016, Afghanistan and China signed A memorandum of understanding to cooperate with the Belt and Road Initiative and support the construction of this Eurasian land logistics network.

While these plans will take time to realize their full potential for passage, Beijing expects the Taliban to mature in its rule. Beijing, with the help of Chinese aid, incoming support Towards post-war reconstruction, including building roads to connect cities and installing energy and resource supply lines, Taliban leaders legitimize politics in Kabul and promote trust and open cooperation with neighboring countries. you can start building. In exchange, Taliban Afghanistan, located in the heart of Asia, offers a great opportunity for dramatic geopolitical change in Beijing’s favor, including expansion of the Eurasian rail network.

The landmass of Afghanistan offers the single most viable route for Central Asia to connect to South Asia. The current state of the Central Asian logistics network is horizontal, with Kazakhstan dominating regional trade transit for products moving between China and Europe. For Beijing, to fully envision land trade and energy routes that could offset the importance of the current maritime system, linking South and Central Asia would be a major challenge to trade and political dynamics in landlocked Central Asia. increasing the importance of the region in the global economy, an alternative that could dramatically change the All of these are involved in China’s plans to militarize Taiwan.

China’s policies toward Xinjiang (East Turkestan), and how those policies are interpreted and accepted in Central Asia, directly affect Beijing’s ability to maintain those policies and continue to project influence in the region. affect. Central Asia, which shares Xinjiang with her 3,000 km border, needs constant upkeep from Beijing to ensure that those opposing extreme policies in Xinjiang have no sympathizers across the border. This is the most important area to do. Over the past two decades, Central Asian governments have designated most Uyghur groups as terrorist organizations. This has reached new heights now that the international community has condemned Beijing’s repressive policies in Xinjiang. The European Parliament in June 2022 will: resolution It said Beijing’s policies amounted to crimes against humanity.

Against this background, President Xi’s visit to Central Asia has become one of the most demanding and important diplomatic trips since he took office.China continues to cooperate with Russia in war in Ukraine despite regional issues voice Condemn Russian aggression. Central Asian countries no longer find comfort in using China to balance Russia, and are looking for new partners, especially in South Asia and the Arab world.

Looking back, we will find that the Central Asian countries cannot separate their history and culture from Xinjiang. In time Central Asia may admit that its experience in the Russian empire is no different from its experience in China-ruled Xinjiang. If Beijing mishandles Xinjiang, it could reverse the small number of Chinese forays made in the region over the past 30 years and create room for a regional rethinking of Xinjiang.

From China’s point of view, Taiwan and Central Asia (and Xinjiang) are connected. A war over Taiwan would cause severe economic turmoil in Beijing, requiring the country to look to Central Asia for energy and keep vital supply chains open. At present, the Central Asian countries have only a minimal understanding of their importance to China’s grand strategy and desire regional integration with the world economy through this overland trade route simply out of economic interest. Building ties with Asia and Arab countries is the best strategy for keeping Central Asia from getting further entangled in China’s geopolitical plans for Taiwan.

The views expressed in this article are those of the author alone and the position of the Foreign Policy Institute, a bipartisan organization seeking to publish well-argued, policy-oriented articles on American foreign policy and national security. priority.