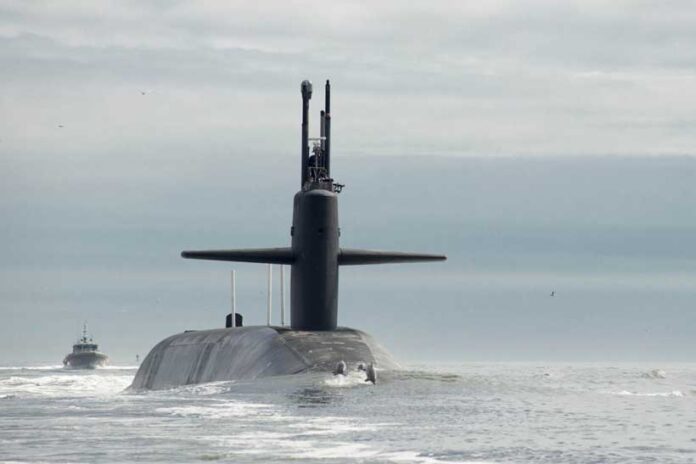 The dilemma experienced by Indonesia in responding to the arms race in the region raises many concerns. Australia has announced plans to acquire a nuclear submarine as part of the US-UK Joint Security Alliance called AUKUS. Australia intends to respond to China’s hegemony in the Asia-Pacific. Just a year ago, Indonesia, represented by the Ministry of Foreign Affairs in September 2021, responded by listing her five points Australia should take note of. A year has passed. What did you think of the commitments made at the NPT Review Conference on September 12-16, 2022 in the “Indonesia’s Response and Analysis on the Treaty of Amity and Cooperation (TAC) among Regional States, Nuclear Non-Proliferation Diplomacy, and Regional Security”? ?

AUKUS is an acronym for three countries: Australia, the United Kingdom (UK), and the United States (US). AUKUS is a trilateral or international security agreement between Australia, the United Kingdom and the United States. The main purpose of this security agreement is to respond to the acceleration of China’s power through nuclear submarine projects. In response to the arms race, Indonesia sent a warning signal to Australia by complying with the norms of international law. A year later, scholars will have to analyze normative perspectives based on the “Treaty of Friendship and Cooperation.” A case study analyzes the causes and responses in Indonesia.

Speaking of AUKUS, on September 17, 2021, Australian Prime Minister Scott Morrison announced that he would meet in person with Joko Widodo. The incident stems from China’s accelerating hegemony in the South China Sea due to its strategic sea lanes and potential oil and gas wealth. China’s stance is inseparable from its assertion of the “nine-dash line” across Southeast Asia. Indonesia ultimately responded to the arms race in the region through Australia’s commitment to five key points, especially her TAC. The TAC is the Association of Southeast Asian Nations (ASEAN) and feels vulnerable during the war between China and the United States. Australia and the United States have agreed to promote lasting peace, friendship and cooperation in Southeast Asia.

Furthermore, the TAC was established in 1976, and the basic principles of peaceful coexistence and friendly cooperation among Southeast Asian nations include Australia as the country closest to Southeast Asia. Australia should heed the international norms that apply to good relations between nations. It is a code that legally binds relations between countries within and outside the region. The treaty was amended three times each in 1987, 1998 and 2020 to allow recognition of countries outside Southeast Asia and regional organizations with sovereign members as members. As of January 2021, the TAC has 43 Contracting Parties.

Looking more broadly at the launch of AUKUS, Indonesia needs to look deeper into the big question mark of Australia’s interest not just in the US but in the surrounding region. AUKUS is a binding agreement between the United States and Australia. This was the beginning of AUKUS, but the agreement brings several technological benefits to Australia regarding cyber capabilities, artificial intelligence and quantum computing, among others. Also, there is comfort in it.

The reason for the formation of AUKUS is the struggle for supremacy in the South China Sea. A dispute in the South China Sea involving China and the United States is driven by several interests, political, strategic and economic. The United States maintains that the LCS should be guarded without legally impeding the movement of military, commercial, and private vessels. In addition, the United States emphasized that littoral states respect her UNCLOS, which includes littoral state peaceful norms for her EEZ. The United States has alliance agreements with Thailand, South Korea, Japan, Australia, and the Philippines in the LCS region. The US also said it has close ties with New Zealand and Singapore. Thus, the United States provides strong development and defense opportunities for Asian national security networks. Indonesia may respond if Indonesia is not involved in the US defense in question, including AUKUS. Australia and the United States have signed an agreement aimed at promoting lasting peace, lasting friendship and cooperation in Southeast Asia.

ASEAN countries are already reeling about the resurgence of multilateral cooperation (Australia, US, Japan, India). Kony Lahakundini Bakri, a military analyst at Ahmad Yani University in West Java, said AUKUS now appears to be beefing up its military strength. Many alliances do not involve Indonesia. This proves that Indonesia cannot remain silent as she is one of the leaders and influential countries among her ASEAN nations.

Referring to functions such as diplomacy, dissolution of deteriorating relations, prevention of war, establishment of cooperation, opinion-building, and the implementation of foreign policy by each country, Indonesia has been involved in the arms race that began to heat up in the LCS incident, Australia’s nuclear deal with the problem. submarine. Led by TAC and UNCLOS, Indonesia gave Australia a precautionary warning. Under the Ministry of Foreign Affairs, the TAC regulates dispute resolution mechanisms between parties to peaceful engagement. The TAC was signed in 1979 by his five ASEAN founding heads of state. The TAC was amended in 1987 to open up membership in other regions. As of 2014, 32 countries (32 countries), including 10 ASEAN countries, are members of the TAC.

Nuclear proliferation has changed over time. Initially, nuclear development was associated only with security. Nonetheless, nuclear is now also being talked about as a security holder. For example, in the India-US Agreement, the United States took the lead in winning India’s acquittal. Even before the India-US nuclear deal was heard, it had disturbing results. The United States has become willing to grant nuclear licenses according to its national interest. Pakistan and Israel, another example of US intervention in the nuclear issue, were also denied access to the nuclear technology market. In August 2007, Pakistan’s national command in charge of its nuclear weapons program was declared. The US-India nuclear deal will affect strategic hegemony and, if left unattended, will allow India a large number of nuclear weapons.

That is what Indonesia fears when it is not included in the security pact between the US and its ally AUKUS. Conflicts in her LCS close to UNCLOS signatory Indonesia need to take action or issue recommendations along with the response. AUKUS has started a project in Australia’s nuclear submarine program. Australia and Indonesia are limited to near sea areas, which may boost Indonesia in the future. The Ministry of Foreign Affairs of the Republic of Indonesia said about Australia’s nuclear submarine.

The result of China’s accelerating power in the South China Sea has attracted a US response to become its player. America joins Australia. Indonesia, which borders the nine-dash line and is directly affected by China’s hegemony in the LCS, is evidenced by Chinese ships intruding into Indonesian waters. By not including Indonesia as part of her AUKUS collection, Indonesia will also have to accommodate her AUKUS project, namely the Australian Nuclear Submarine. While the aim is to counter China’s hegemony in her LCS, Indonesia should be wary of maritime powers close to Australia. Therefore, Indonesia issued a statement that its response to Australia’s nuclear submarine project was withdrawn from the normative aspect, especially in the holding of the “Treaty of Friendship and Cooperation”. Indonesia also cautioned Australia to take care and respect UNCLOS 1982 in maintaining peace and security in the region.

“Indonesia calls on all parties to the Treaty to garner political will and create opportunities for IAEA Member States to develop constructive approaches to nuclear weapons verification and monitoring arrangements. Strengthen monitoring measures for uranium designated in naval-propelled reactors of non-nuclear-weapon States to prevent diversion of that material for use in nuclear weapons programs, with a view to strengthening the sanctions agreement.”

In July 2022, the anniversary year of AUKUS, IAEA Director General Rafael Grossi said he was pleased with Australia’s commitment to adhere to nuclear non-proliferation. The 10th Review Conference of the Treaty on the Non-Proliferation of Nuclear Weapons (NPT), held September 12-16, prompted discussion on AUKUS. Indonesia is opposed to her AUKUS, and the Ministry of Foreign Affairs of the Republic of Indonesia said Australia’s nuclear submarines, especially its nuclear program near Indonesian waters. A year later, Indonesia’s proposal received international attention. The filing shows that Indonesia has opposed her SSN program in Australia and is trying to block it. Whatever the Indonesian government’s personal views, the working paper is not against Australia’s takeover of her SSN. In fact, it provides a route to establishing a robust protection regime.