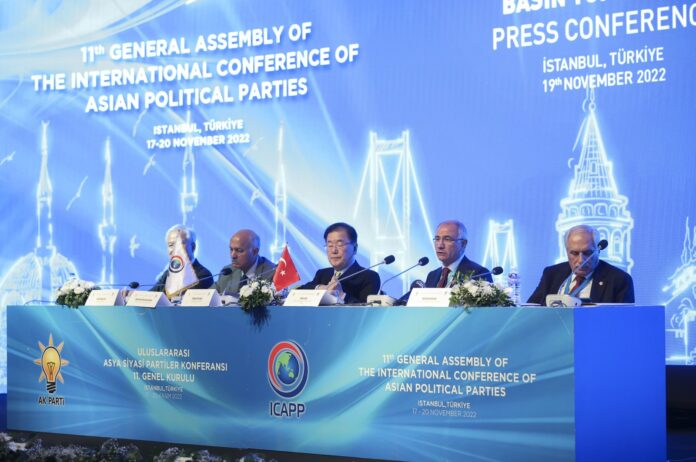 Emphasizing “mutual respect” for territorial integrity and sovereignty, the regional group of Asian political parties on Saturday urged Russia and Ukraine to “lay down their arms” and give diplomacy a chance.

“We are deeply concerned about the ongoing military conflict in Ukraine, especially the implementation of a large-scale humanitarian catastrophe,” it read. Istanbul Declaration of the 11th Plenary Session of the International Conference of Asian Political Parties (ICAPP)adopted at the end of a three-day rally in a large Turkish city.

About 200 guests from party representatives and international organizations delivered speeches on “The Role of Political Parties in Strengthening Dialogue for Global Peace, Prosperity and Cooperation”.

ICAPP praised Ankara’s role in brokering the landmark grain deal signed in Istanbul by Turkey, the United Nations, Russia and Ukraine in July, and extended support for its ongoing implementation. A few days before the scheduled expiration, the deal was extended for another 120 days from Nov. 19.

“We make it clear that we oppose violence of all forms and magnitudes and, in abiding by international law and the United Nations Charter, will immediately renounce arms against all parties fueling regional and global conflicts. and urged them to resume diplomatic efforts to resolve their differences peacefully,” the ICAPP declaration read.

Russia launched a war with Ukraine in February, causing tens of thousands of casualties and sparking global condemnation of Moscow’s move.

The ICAPP declaration states that long-standing and newly escalating conflicts “will affect the overall security of all members of the international community, both in the region and globally, as countries become increasingly interdependent and interconnected.” It poses a significant potential threat.”

But in the midst of the “Asian Century,” ICAPP said there were “dark clouds of conflict that pose serious risks to regional and global peace and stability.”

“We stress the importance of avoiding bloc politics and emphasize cooperation over competition, because common challenges require collective responses,” read the declaration.

The Asian Regional Group said that political parties are “intrinsic to democracy and the driving force behind democratic values.”

“They are an important unifying factor in the growth of social cohesion and consciousness in any country because they represent people of different shades, classes and backgrounds on a common platform,” the declaration read.

About 70 political parties from 33 Asian countries including China, Pakistan, Indonesia, Cambodia and South Korea participated in the three-day event. The biennial conference, which began in the Philippines in 2000, was scheduled to take place in Turkey two years ago, but was postponed due to the COVID-19 pandemic. The United Russia Party hosted its 10th General Assembly in 2018 in Moscow.

speaking at a conference, Communications director Fahrettin Altun said Turkey is now being described as a “stabilizing force” in the international relations literature.

“Turkey’s efforts for peace and stability have also yielded results in the Russian-Ukrainian war. Erdogan has been striving for open dialogue: a diplomatic solution and just peace from the beginning,” Altun said.

“Thanks to the trust placed in our president and Turkiye, negotiations between Russia and Ukraine were able to start in our country. By the way, I believe we can go back to negotiations and achieve a lasting peace,” he added.

Turkey’s National Intelligence Service (MIT), as a result of the Turkish president’s principled and constructive policies, has brought together the heads of the US and Russian intelligence agencies in Ankara to discuss threats to regional and global security. said Altun.

“A good example of information diplomacy, this initiative once again demonstrated Turkey’s potential and its ‘stabilizing power,'” he added.

Stay up to date with what is happening in Turkey, the region and the world.