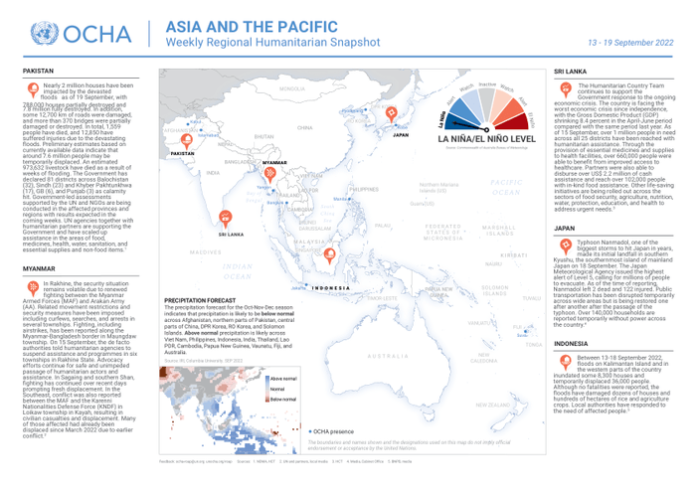 Nearly 2 million homes were affected by devastating floods as of September 19, with 788,000 homes partially destroyed and 7.8 million homes completely destroyed. In addition, about 12,700 km of roads were damaged and more than 370 bridges were partially damaged or destroyed. In total, 1,559 people died and the devastating floods left him with 12,850 injuries. Preliminary estimates based on currently available data indicate that approximately 7.6 million people may be temporarily displaced. An estimated 973,632 livestock died as a result of weeks of flooding. The government has declared 81 districts affected by the disaster in Balochistan (32), Sindh (23), Khyber Pakhtunkhwa (17), GB (6) and Punjab (3). Government-led assessments supported by the United Nations and NGOs are being conducted in affected states and territories and results are expected in the coming weeks. UN agencies, along with humanitarian partners, are supporting governments, expanding support in the areas of food, medicines, health, water, sanitation, essentials and non-food items.

The security situation remains precarious in Rakhine State as fighting resumed between the Myanmar Army (MAF) and the Arakan Army (AA). Relevant movement restrictions and security measures have been imposed, with curfews, searches and arrests in several townships. Fighting, including airstrikes, has been reported along the Myanmar-Bangladesh border in Maungdaw township. On September 15, de facto authorities notified humanitarian agencies to suspend aid and programs in his six townships in Rakhine State. Advocacy for safe and unhindered access and assistance for humanitarian workers continues. Fighting has continued in recent days in Sagaing and southern Shan State, prompting fresh evacuations. In the southeast, in Kayah’s Loikaw township he reported clashes between the MAF and the Karenni Nationalities Defense Force (KNDF) resulting in civilian casualties and displacement. Many of the affected people had already been displaced since March 2022 due to previous conflicts.

The Humanitarian Country Team continues to support the Government’s response to the ongoing economic crisis. The country is facing its worst economic crisis since independence, with gross domestic product (GDP) falling 8.4% from April to June compared to the same period last year. As of 15 September, he has reached more than 1 million people in need across 25 districts. More than 660,000 people have benefited from improved access to healthcare through the provision of essential medicines and supplies to health facilities. Partners also contributed more than US$2.2 million in cash assistance and was able to provide in-kind food assistance to more than 102,000 people. Other life-saving initiatives are being deployed in the areas of food security, agriculture, nutrition, water, conservation, education and health to address urgent needs.

Typhoon Nanmadol, one of the biggest storms to hit Japan in recent years, first made landfall on September 18 in southern Kyushu, the southernmost island of mainland Japan. The Japan Meteorological Agency issued a maximum level 5 warning, urging millions to evacuate. At the time of reporting, Nanmadol remains with her two dead and her 122 wounded. Public transportation was temporarily disrupted over a wide area, but has been restored after the typhoon passed. Across the country, he reported that more than 140,000 homes were temporarily without power.

From 13 to 18 September 2022, floods hit Kalimantan and the western part of the country, inundating about 8,300 homes and displacing 36,000 people temporarily.
No deaths have been reported, but the floods damaged dozens of homes and damaged hundreds of hectares of rice and crops. Local governments have responded to the needs of those affected.