After ASEAN and G20, diplomats make last push on Ukraine crisis at APEC 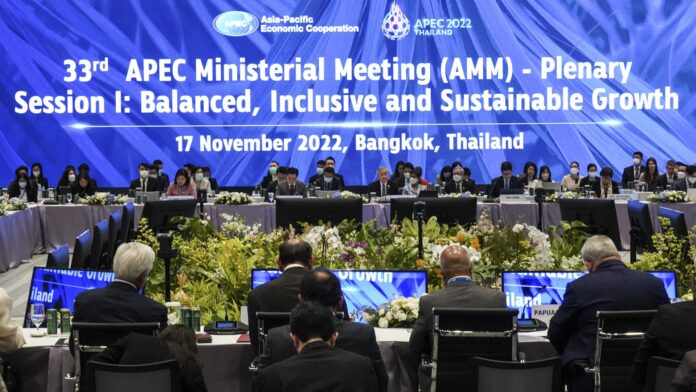 The possible spillover of the war in Ukraine to the east of Europe risks triggering a new phase of the conflict and will cast a shadow on the agenda of this week’s APEC summit in Bangkok.

BANGKOK—The war in Ukraine could spill over to the east of Europe, threatening to trigger a new phase of conflict that will cast a shadow over the agenda of the APEC summit in Bangkok this week.

The latest developments in Europe could outstrip the Asia-Pacific Economic Cooperation Forum as business leaders, heads of state and diplomats try to find a way out of the conflict in Ukraine. The war caused stubbornly high global inflation, challenging policy makers and creating a cost of living crisis.

The summit, traditionally a forum aimed at investment deals and trade liberalization, follows the ASEAN meeting in Phnom Penh and the G20 meeting in Bali. In recent diplomatic efforts in the region to seek consensus among world leaders to secure a route to peace talks between the warring parties, this may be the last chance. not.

Kasemsit Pathosak, Executive Director of the APEC CEO Summit summed up the results business leaders would like to see: as soon as. ”

“People in all APEC economies are suffering from global economic challenges exacerbated by Russia’s war,” US Secretary of State Anthony Brinken told journalists on Thursday.

“Dealing with these consequences together was a key focus of our meeting here in Bangkok. Thailand has demonstrated exceptional leadership in navigating APEC through difficult times,” he said. .

Expectations that it will be a breakthrough in diplomacy are low. Chinese President Xi Jinping and Indian Prime Minister Narendra Modi will attend, but not major stakeholders such as US President Joe Biden and Russian President Vladimir Putin.

Moreover, the APEC Ministerial Meeting leading up to the November summit failed to issue a joint statement or a joint statement clarifying its position on Ukraine. Russia itself is a member of 21 economic blocs, along with its allies China and India.

Thai Foreign Minister Don Pramdwinai remains optimistic. In a speech to the United Nations General Assembly in September, he described the upcoming ASEAN, G-20 and APEC summits as a kind of rolling diplomatic venue and “a golden opportunity for all super-stakeholders of the Ukraine crisis”. said there is.

The high-level meeting could serve as “a possible off-ramp or exit to this high-tension global crisis in Ukraine.”

APEC is shaping up as a platform for a final diplomatic push, with all eyes on the bloc to see if it releases a joint statement that will bring it closer to a unified position on Ukraine.