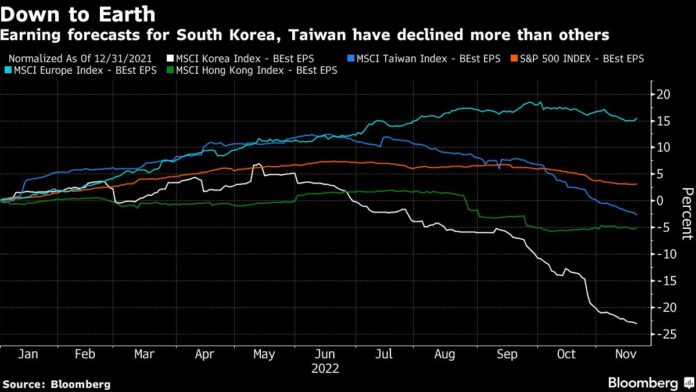 (Bloomberg) — An early rally in North Asian stocks is being touted as the start of a potential bull market amid growing bets on China’s gradual reopening and the chip industry’s bottoming out.

Stocks listed in Hong Kong, South Korea and Taiwan have been sluggish for much of this year as they rely heavily on China’s economy, which has been weighed down by strict COVID-19 measures and the property crisis. Meanwhile, domestic demand-driven southern markets in Indonesia and India showed resilience. This month, the tables turned with an aggressive policy move by Beijing.

“We are concerned that Southeast Asia has started to underperform in recent weeks as investors return to North Asia,” said Alexander Redman, chief equity strategist at CLSA. “As a defensive and domestically oriented commodity exporter, Indonesia was the logical haven to weather the stock storm,” he said, adding that “investors are once again looking for deep value cyclical exposures in North Asia. The market will be less popular because of the involvement,” he added.

Foreigners piled $5.8 billion into Taiwanese stocks this month, on track for the first inflow in half a year and the largest in 15 years. The net purchase of Korean stocks is expected to exceed $2 billion for the second straight month.

By contrast, the Indonesian market, once favored by investors as an inflation hedge, flattened in November and is poised to turn negative monthly flows for the first time since July. Investors have also become more wary of valuations in India, where benchmarks recently hit record highs, with Goldman Sachs expecting the market to relatively underperform in 2023.

In a report, Jefferies strategists led by Desh Peramunetilleke wrote: “Positive catalysts such as a potential China resumption of economic activity and policy support, easing geopolitical tensions and the bottoming out of the technology cycle are expected to drive a sharp rise in North Asian markets. It is likely to encourage re-evaluation.” Brokers are overweight Hong Kong, China, South Korea and Taiwan, neutral Indonesia, and underweight India.

South Korea and Taiwan’s bullish case is also based on chip dominance, as they are home to industry giants such as Samsung Electronics and Taiwan Semiconductor Manufacturing. It also has China as its largest trading partner.

SocGen and Lombard Odier Private Bank this month, along with Morgan Stanley, said investors should return to Asian semiconductor stocks.

SocGen strategists led by Alan Bokobuza wrote in a report last week that “stocks typically bottom two to three quarters before the bottom of the semiconductor cycle.” “We may be at this point.”

Chinese stocks in Hong Kong are poised for their best monthly reading since 2006 as asset managers from M&G Investments and Eastspring Investments to Franklin Templeton Investments jump into the rally.

On the mainland, foreign funds acquired about 49 billion yuan ($6.8 billion) worth of shares through business ties with Hong Kong.

That said, the ascent to North Asia is far from flat.

Due to its heavy dependence on exports, the market is vulnerable to the risk of a global recession and is often at the center of geopolitical tensions involving the US and China. In addition, a record number of virus cases in China also dampened the market’s positive momentum.

“Geopolitical concerns continue,” said Vivian Lynn Thurston, portfolio manager at William Blair Investment Management. And while the industry cycle is spinning, “I think we need to reassess the cycle and the proposition if the global economy is slowing,” she added.

Nonetheless, earnings forecasts have already fallen significantly across the northern economy, so the market may have more upside potential. Indexes for China, South Korea and Taiwan are still down more than 15% year-to-date, while indexes for Indonesia and India are up about 7% each.

“If we use the metaphor of a train leaving a station, the main locomotive is South Korea, which is already quite far from the station,” Jonathan Garner, chief Asia Emerging Markets equity strategist at Morgan Stanley, said in an interview earlier this month. there are,” he said. “Now the Taiwanese engine is also leaving the station.

–With help from John Cheng.